Stilleben – an exhibition consisting of flowers. 23 artists have been invited to contribute with a story of a flower bouquet once received or given away, and also the description of the composition of flowers. This is the basis upon which Rakett has reconstructed the flower bouquets, presenting them with their respective accompanying stories. The contributions range from highly personal experiences of loss of a close person to conceptual or more formal approaches to the given task. 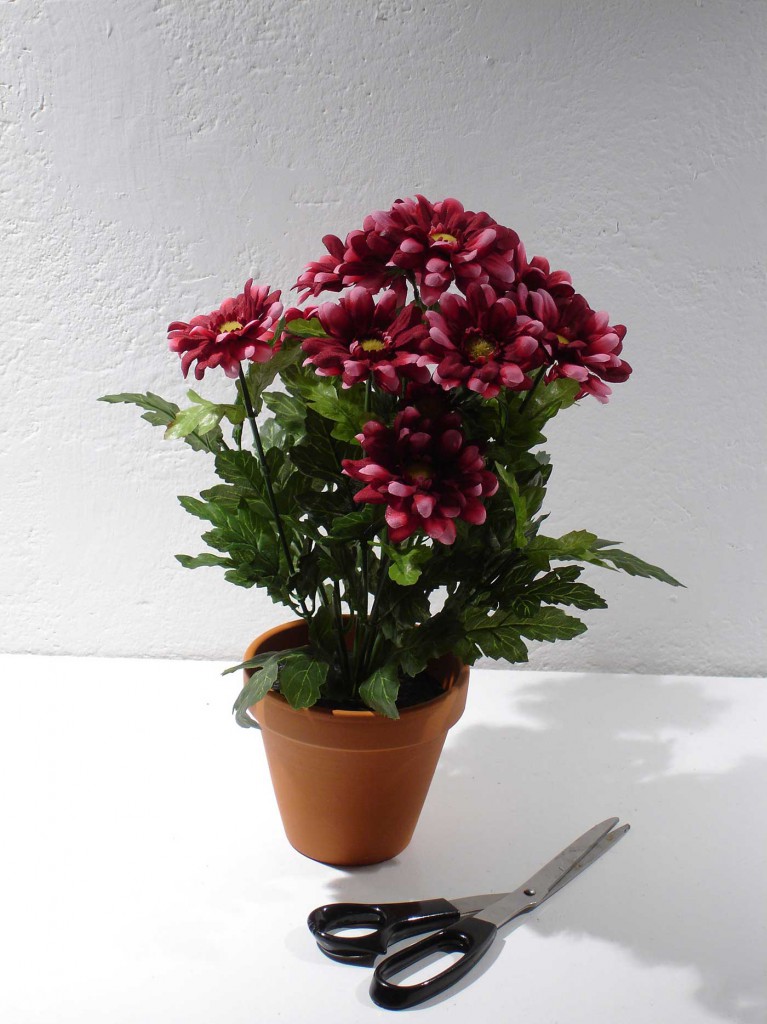 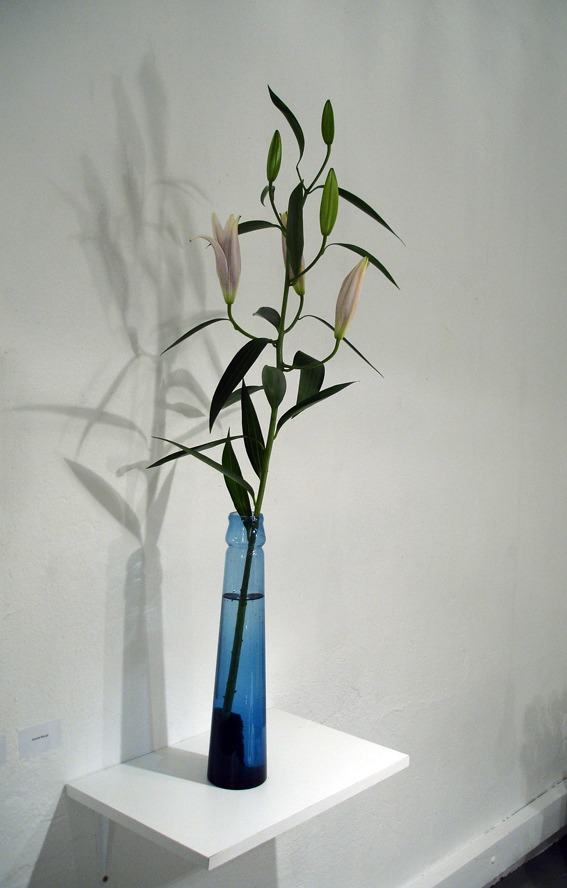 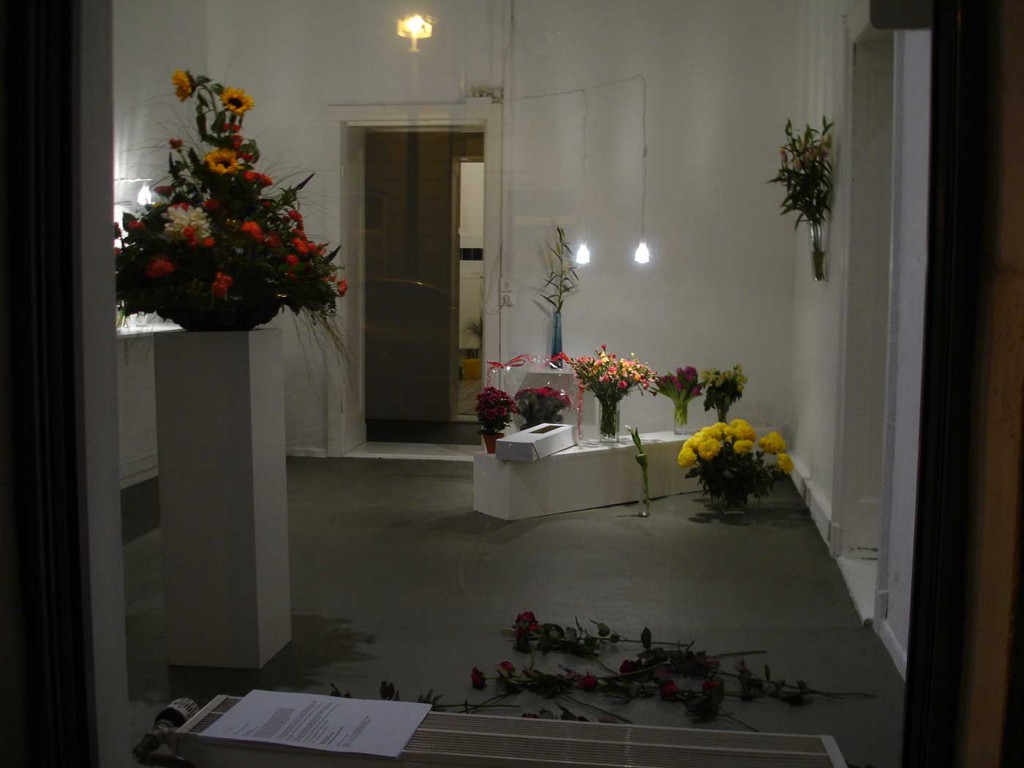 Installation view of the space from the street. Photo: Rakett

Installation view of the space from the street. Photo: Rakett 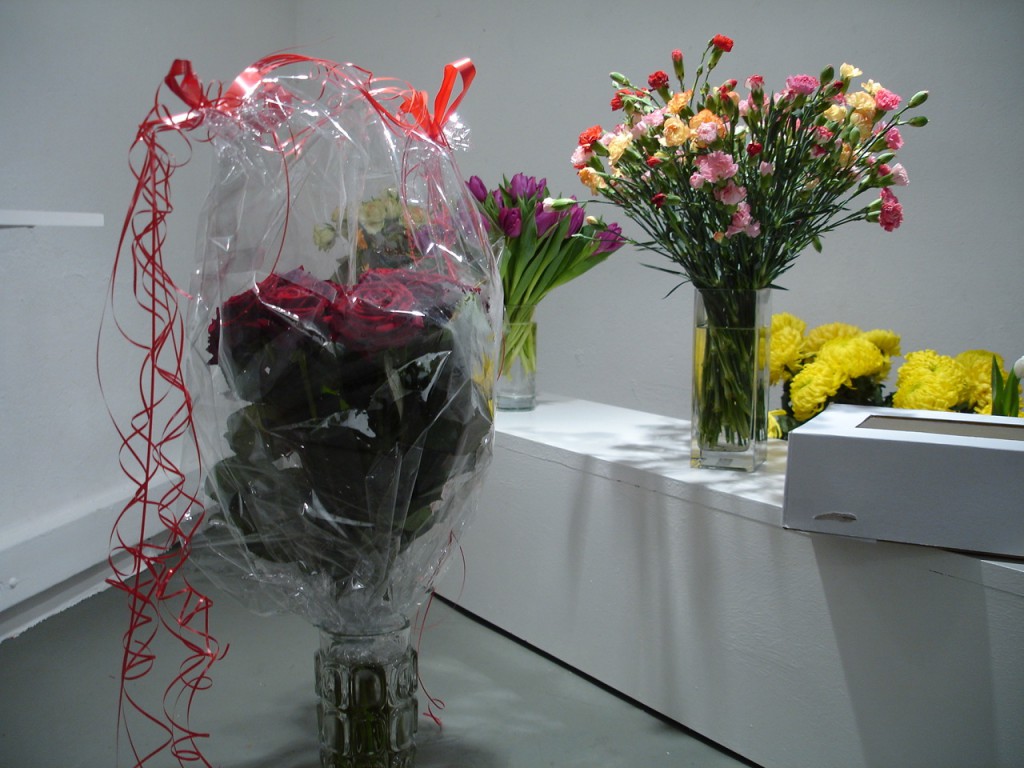 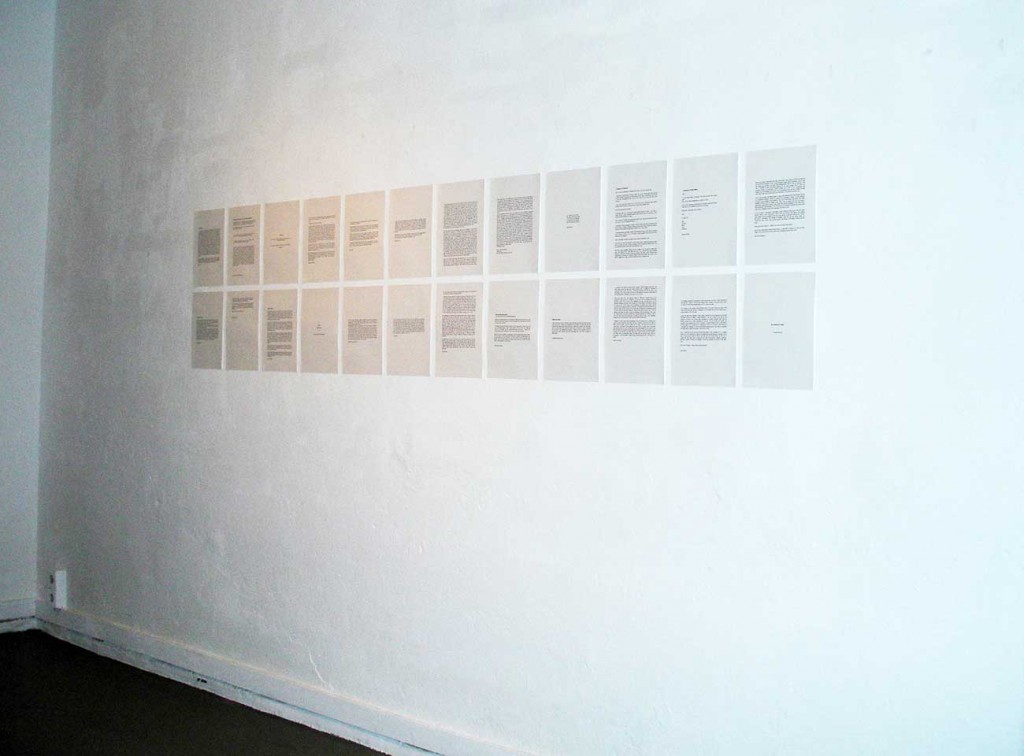 Installation view, space no 2. Each text corresponding to a bouquet of flowers in space no 1. Photo: Rakett

Installation view, space no 2. Each text corresponding to a bouquet of flowers in space no 1. Photo: Rakett 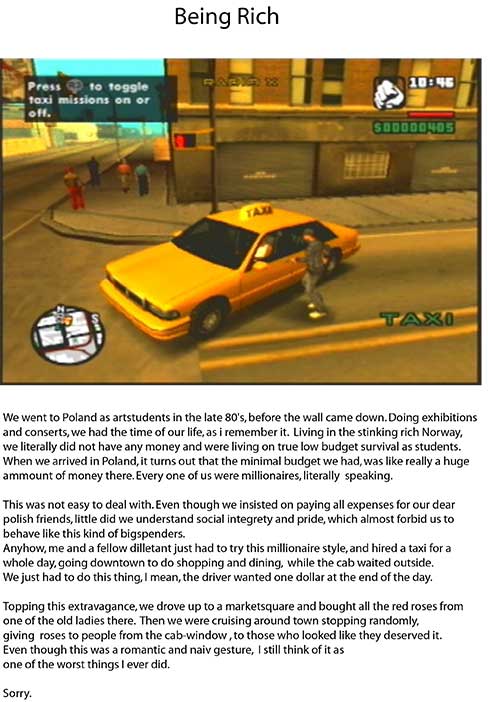 Terje Nicolaisen: Being Rich, 2005. Received contribution from the artist.

Terje Nicolaisen: Being Rich, 2005. Received contribution from the artist. 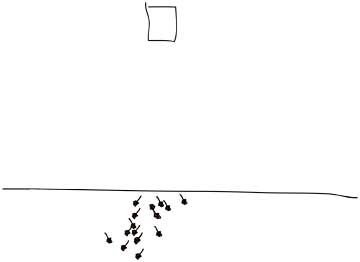 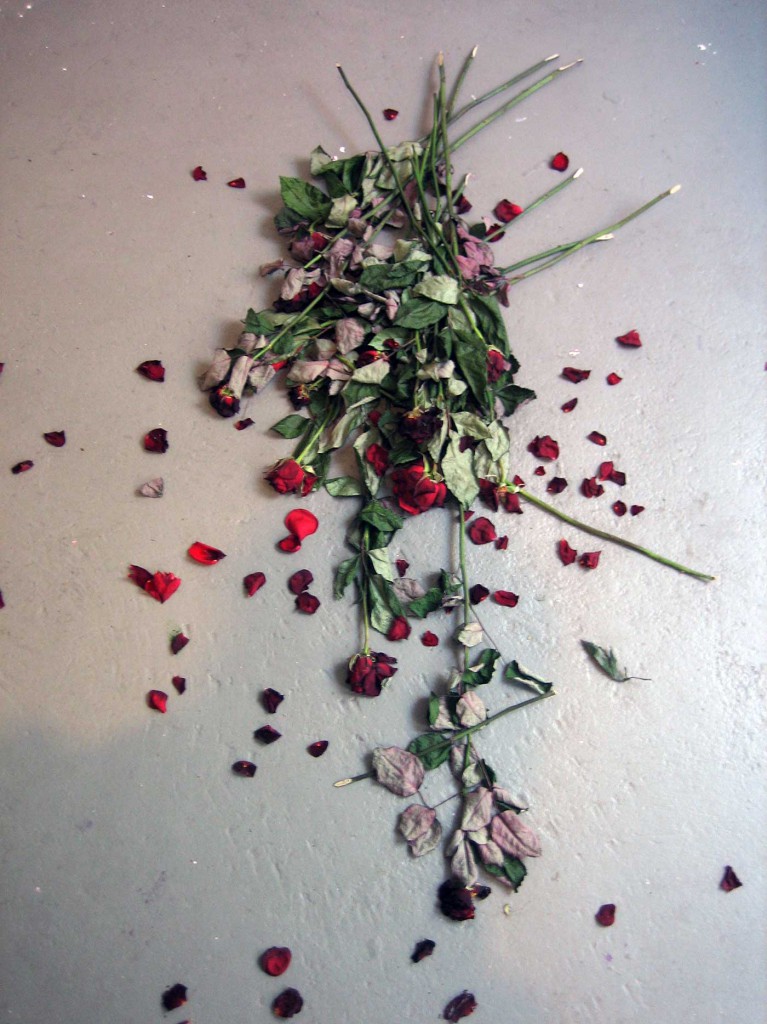 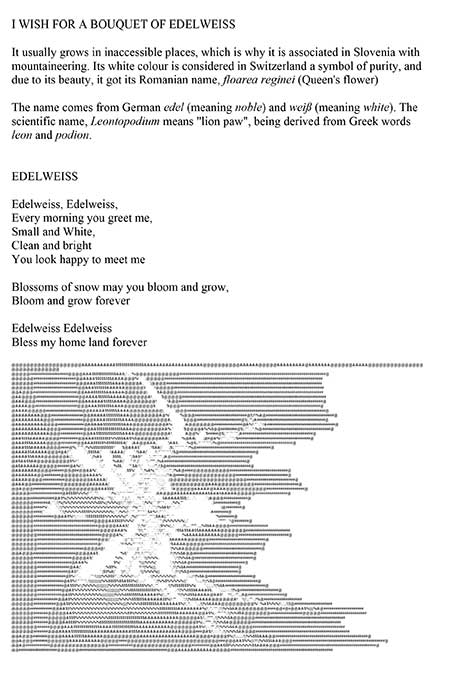 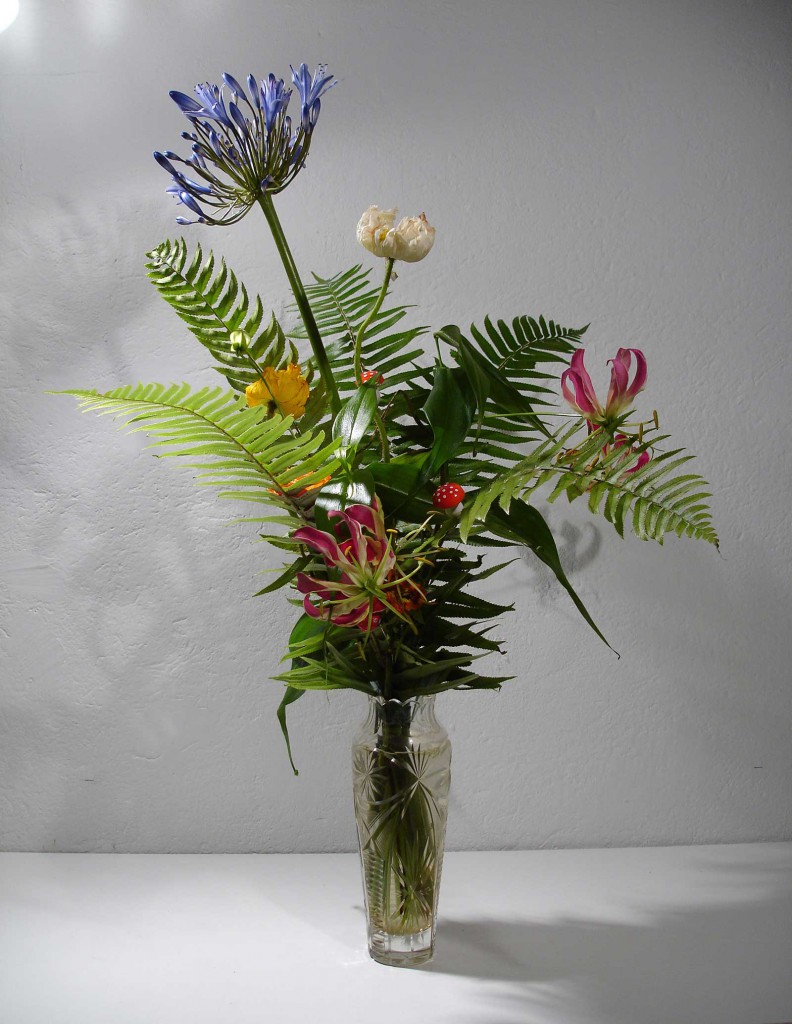 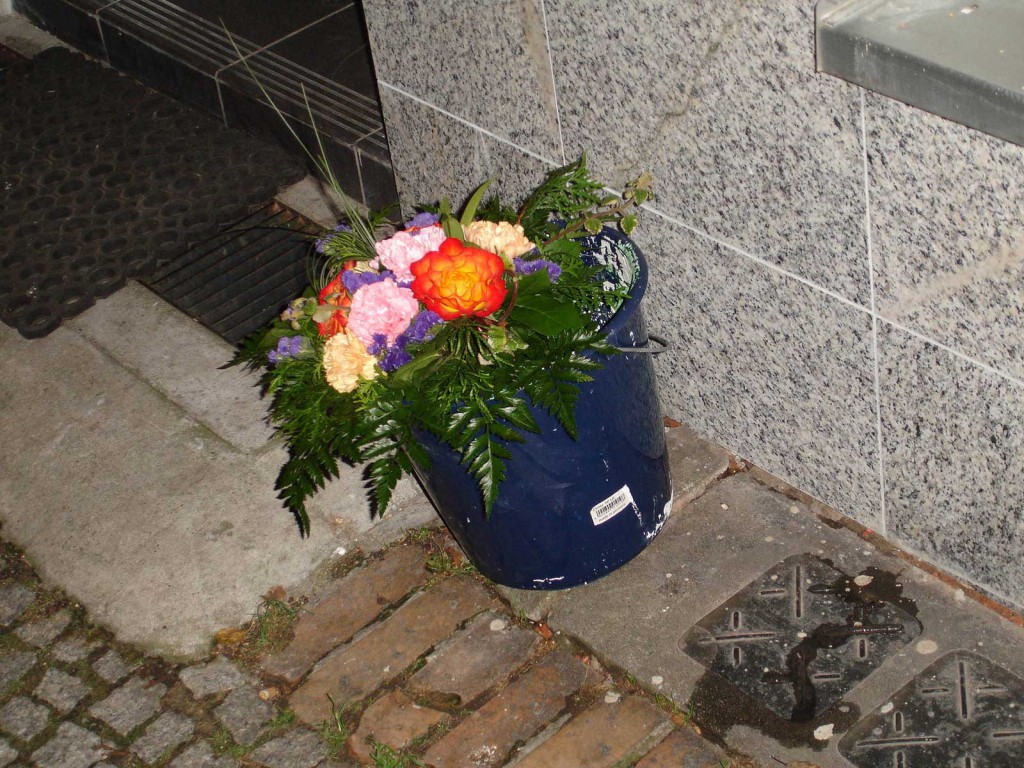 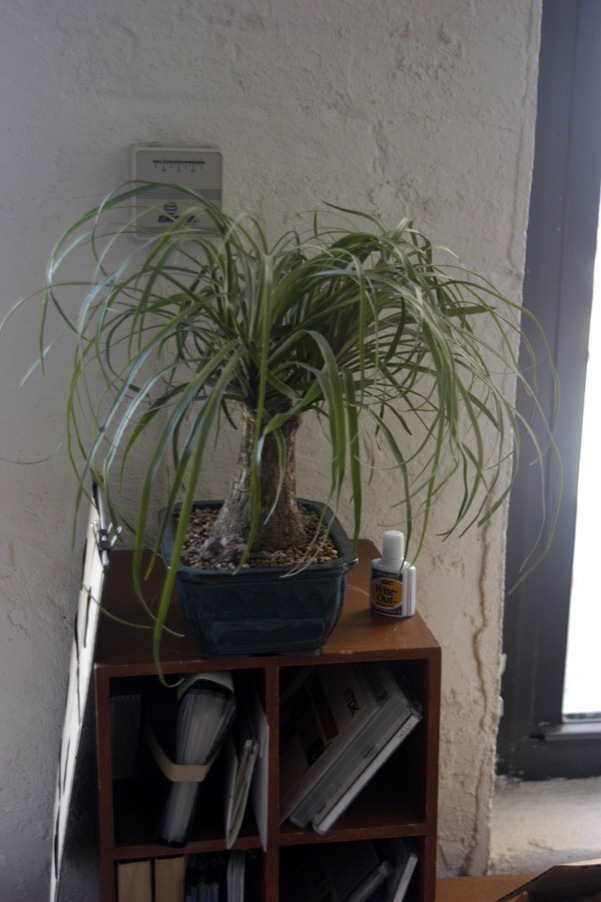 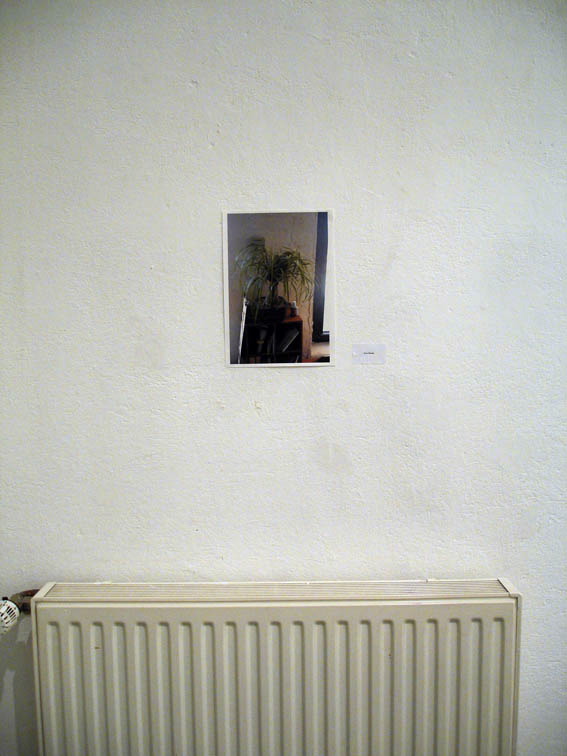 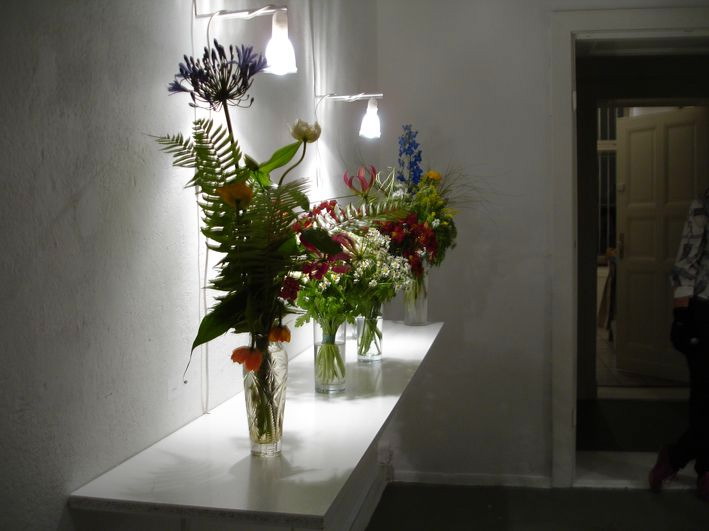 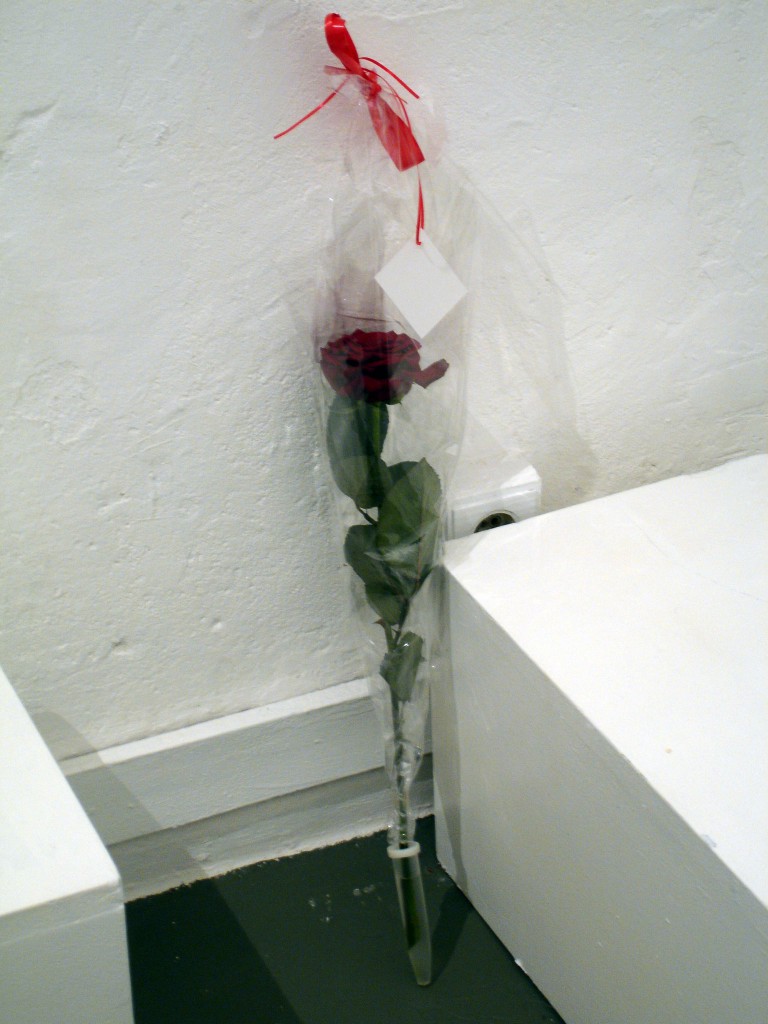 Contribution from Lars Morell. As installed at 0047. Photo: Rakett

Contribution from Lars Morell. As installed at 0047. Photo: Rakett

The project is our interpretation of the classical Stilleben tradition, known from different periods of art history where flowers were and still are, often used as a motive. They often carry a symbolic value and are a reminder of the vanity of life and beauty (in French this tradition is called nature morte).

The exhibition lasted for ten days, leaving time for the flowers to blossom and wither. In the reconstruction of the flower arrangements we have tried to be as true to the descriptions as possible, but seasonal variations make some of the originals impossible to reconstruct identically, leaving us with the limitations of the geographical position and the current flower-market of the time of year. In the gallery space the flower bouquets are represented with all its flaws and shortcomings in the effort of coming as close to the original description as possible. In the same manner the original personal stories are represented through words on paper. The flower as a symbol (as the representative of something else) and as a vehicle for meaning, is thus seen from several aspects.

The invited artists are working in different media from painting, installation, video, photo, sound or text, but for this occasion they are working with the given format: flowers.

Some of the artists’ texts:

It is customary, that when you are invited for a party, you are expected to bring a small gift or a bunch of flowers for your host. When I was invited to a good friend’s birthday party some years ago, I couldn’t quite decide, if I wanted to bring a flower bouquet for my friend, in addition to the gift I had already bought. On the one hand I wanted to bring some flowers, because I thought it would be a nice way to greet him when I arrived, but on the other hand I was afraid it would be taken as a cliché. You know, something which is just much too expected.

Eight months later I was celebrating my own birthday and among other people, I had invited my old friend whom I had given the artificial flowers. Much to my surprise, he brought a bunch of flowers, when he arrived, wrapped in green paper. When I unwrapped it, I found exactly the same bunch of artificial flowers, which I had given to my friend eight months earlier. The following many years this bunch of artificial flowers actually kept passing back and forth between us each time one of us was celebrating his birthday. Somehow it felt like a fun tradition we had made up ourselves.

I recently read that Mark Twain once wrote, that whatever a man’s age, he can reduce it several years by putting a bright-colored flower in his buttonhole. I therefore invite all visitors at the exhibition to pick a nice artificial flower of the bunch to place it in their buttonhole.

Owl, take me for thy nest!
Thy claws, thou bird of night,
in velvet gloves are dressed
to scratch the sacred glyphs
upon the dead man’s breast.

In memory of Isaac

This summer when I was in Kirkenes I went for my usual hour long run in the hills, as I was running I kept on thinking of my ex husband, the Mexican artist Adolfo Patiño. For some reason I could not get him out of my mind, I kept on thinking about him and of our years together and how, on one of my birthdays he filled our bedroom with flowers, so many that it looked like a florist’s shop. The images of our days, his letters to me and the artworks we made together kept flashing through my mind. The feelings and memories were overwhelming. Even though we were now divorced, we maintained in our hearts a close and loving friendship with deep respect for each other.

As I was running back to the house I was staying in, I saw at a distance, along the highway I was running on, at the other side of the road a perfect bouquet of yellow daisies. I felt that the flowers belonged to a girl, and I tried to imagine who she was. It was a beautiful round bouquet and perfectly joined at the bottom, it looked like it had been cut from a bush, but there were no daisy bushes around and it was just lying there along the side of the road. As I got closer, the bouquet seemed to move, as if it had a mind of it’s own, and began to roll to cross the highway with the flowers facing me, like a wheel. It began to roll, and then it stopped as a car drove down on the opposite side of the road. When the car finished crossing it continued to roll and then it stopped again to let another car cross the other side of the road and when the car had passed, it continued to roll to the side of the road I was on. It continued to roll until it landed exactly at my feet and then it stopped. I stood there, amazed at what I was seeing and unsure about what this meant or what to do, so I just stood there looking down at this beautiful bouquet of yellow daisies. I somehow felt that the daisies were meant for me and I picked them up and continued on my way to the house where I was staying. I came into the house, put them in water and placed the flowers next to my bed. I then checked my messages and on my e-mail was a message from Adolfo’s brother telling me that Adolfo had just had an accident and had passed away moments ago. I knew then that it was Adolfo Patiño who had sent me the beautiful bouquet of yellow daisies.

I miss him so much.

A bouquet of dandelions (or flowers resembling dandelions)

In the book ”The Crying of Lot 49”, by Thomas Pynchon, the main character Oedipa, is drinking homemade wine made of dandelions. She is told that the dandelions were picked two years ago in a graveyard that today is made into a highway.

The size of the bouquet should relate to the amount of dandelions needed in order to brew a bottle of dandelion wine.

In a room perhaps a third of the way along the suite he sat her in a rocking chair and brought real homemade dandelion wine in small neat glasses.

“I picked the dandelions in a cemetery, two years ago. Now the cemetery is gone. They took it out for the East San Narciso Freeway.”

She could, at this stage of things, recognize signals like that, as the epileptic is said to an odor, color, pure piercing grace note announcing his seizure. Afterward it is only this signal, really dross, this secular announcement, and never what is revealed during the attack, that he remembers. Oedipa wondered whether, at the end of this (if it were supposed to end), she too might not be left with only compiled memories of clues, announcements, intimations, but never the central truth itself, which must somehow each time be too bright for her memory to hold; which must always blaze out, destroying its own message irreversibly, leaving an overexposed blank when the ordinary world came back. In the space of a sip of dandelion wine it came to her that she would never know how many times such a seizure may already have visited, or how to grasp it should it visit again. Perhaps even in this last second but there was no way to tell. She glanced down the corridor of Cohen’s rooms in the rain and saw, for the very first time, how far it might be possible to get lost in this.

He poured her more dandelion wine.

“It’s clearer now,” he said, rather formal. “A few months ago it got quite cloudy. You see, in spring, when the dandelions begin to bloom again, the wine goes through a fermentation. As if they remembered.”

No, thought Oedipa, sad. As if their home cemetery in some way still did exist, in a land where you could somehow walk, and not need the East San Narciso Freeway, and bones still could rest in peace, nourishing ghosts of dandelions, no one to plow them up. As if the dead really do persist, even in a bottle of wine.

This exhibition was kindly supported by Sparebanken Vest, Hordaland