As we threw the dices given by aiPotu it turned out that our spot on the Monopoly board was the street named Torggata, or as we call it, the kebab-street, as this is the most densely kebab restaurant-populated street in Oslo. Torggata is a quite crowded street with lots of people passing all the time. Our focus was inspired by this, and we wanted to make a meeting place and a hangout for by-passers, city-strollers and hang-arounds, located at the square that is connected to Torggata. We constructed a pallepalass (palace of pallets), which one could describe as a sculpture consisting of 30 pallets of the European standard, the euro-pallet. The sculpture was used as tribune to watch and listen, a place to sit down and talk to people or to make your lunch appointment. 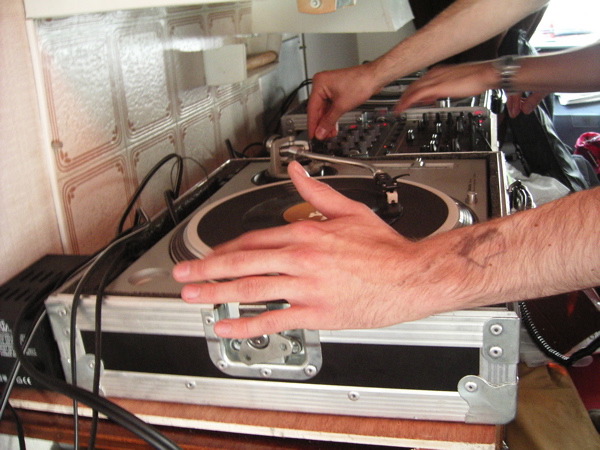 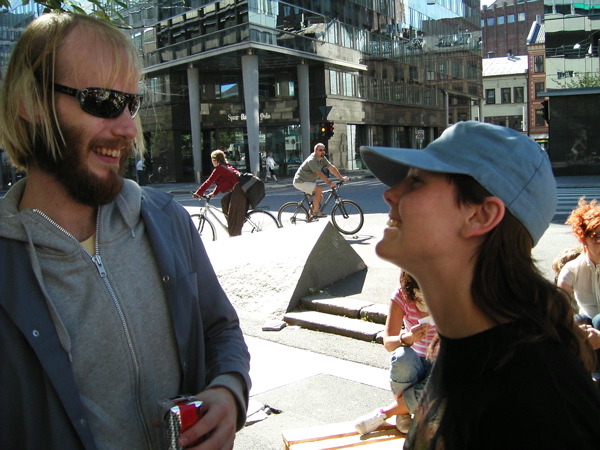 Centre of the Universe in conversation with Karolin Tampere

Centre of the Universe in conversation with Karolin Tampere 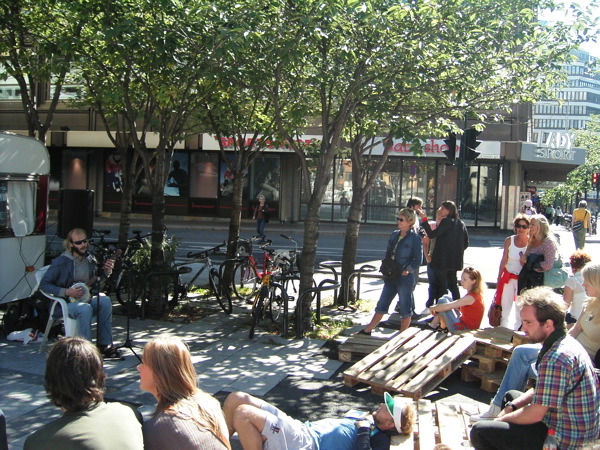 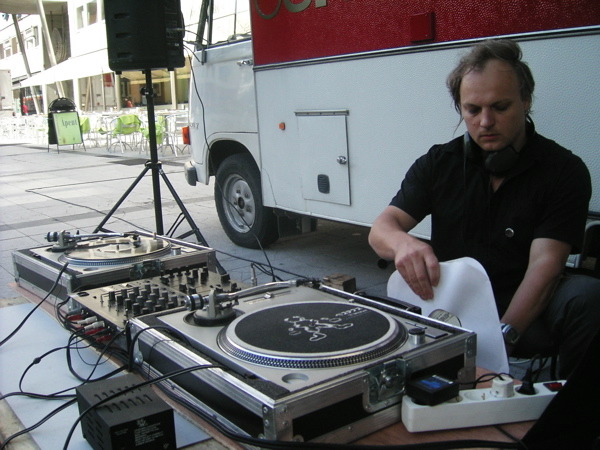 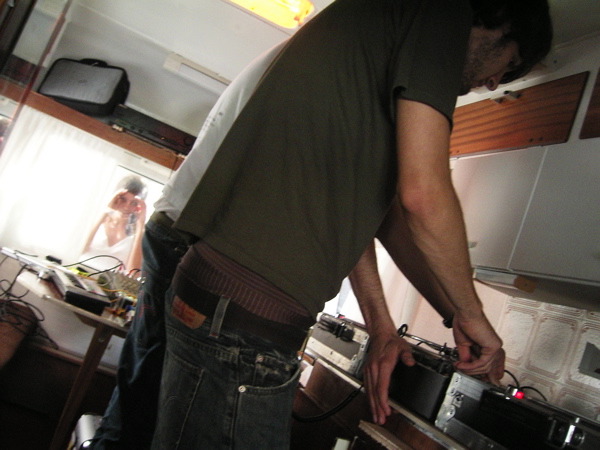 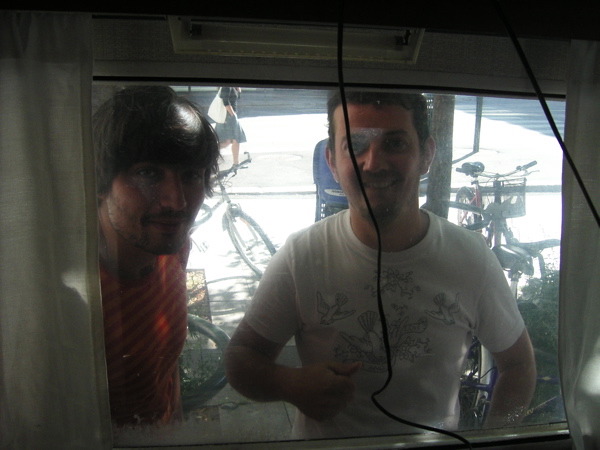 Situated in the area around Torgata there is also three big music venues, one of them is called Sentrum Scene, this was where we chose to place the Oslo Mobile Kunsthall wagon. Because this venue had been closed down for many years (but just recently opened again) we thought it would be nice to make a live sound event outdoors on this particular square. Also a bit ironic is the name Sentrum Scene (the centre stage), because this is actually a rather dead square, people pass by, it is mainly functioning as a shortcut from one street to another, with tall buildings all around.

The project Oslo Mobile Kunsthall was initiated by the duo aiPotu (Anders Kjellesvik and Andreas Siqueland) in collaboration with Helga Marie Nordby, and consisted of a series of temporary art projects in the public spaces of Oslo. When we got the invitation from aiPotu to join the project, we immediately started to think about making a live event, as we wanted to use the possibility to invite more artists to participate in the mobile kunsthall project. The program was put together of both earlier and new collaborations of Rakett, but now in a new package, the idea being an imaginary battle between performers from Norway and Austria with two duo and two solo projects.

Between 12 – 17:00 hours you can climb our -oslokunstpallepalass-, and enjoy four live concerts streaming out from inside of the mobile caravan.

As the sign Sentrum Scene, shined bright over the vehicle, we started off the sound event with one of our favorite guys, Centre of the Universe (no) has released a great amount of ep’s and records (also with his other project Now we got Members), at the tiny record label called Metronomicon Audio. The sound has lately turned more and more towards electronica with an oriental touch. Fine and pretty pop-music with a heartbreaking vocal, ancient computer equipment and old instruments: Melodica, speed racing drum-machines, flutes, wineglasses and everything else that might be around. On this Rakett event the Centre of the Universe sat outside of the Oslo Mobile Kunsthall, on a plastic chair with his banjo inviting the by-passers to stop up for a minute and dive into his dreaming melodies and sweet voice. The sun was shining after some days of rain and this was the best and softest way of starting a really good morning.

Next to come was St.einar ha krist DGM/ reinforcement and bounce by Kenneth Wange.

This is by the artists introduced as: cut and paste based interelectronica, worshiping the banal intensity of: compact and violent extremity of ultramelodic and poetic audioscapes.

Steinar Kristensen is an artist/musician also working with constructing interactive installations with self-invented and rebuilt instruments and recorded sounds. For this event he again invited his colleague and musician collaborator Kenneth Wangen, into the wagon, to present a short set from their collaborative repertoire. This was a mixture of live and pre-recorded materials, vocal and guitar. One could enjoy the performers through the windows or just by listening from the pallepalass. A quite humouristic and confusing sound experience, from the depths of a mobile home.

The originally Austrian, but now Bergen based, two artists, dj-s and record-label owners, Sex Tags, entered the stage and ended up with making a 2 hour long dj-set. Also placed inside of the wagon (with an obviously wrong proportioned roof to these lengthy people) they still kept the energy high on both the inside and the outside, where many people already had gathered, sitting and chatting about. By using the turntables as tools they made various mixes of their own produced music and records. A kind of day party at the central stage square where actually some people had dressed properly and had put on their little red shoes.

The turntables was then moved outside, in front of the wagon, where Franz Pomassl started his live performance. Pomassl is one of the dazzling figureheads of the cutting edge electronic music scene. The Austrian based “psycho-physio” musician, sound and recording artist, label network operator, festival organizer and turntabelist, counts to the early protagonists and today’s exploring pioneers of new electronica and future experimental play. By mixing his own and other records, Pomassl managed to fill every inch of the whole square with his intense and beautiful soundscapes. Placed outside of the wagon, he entertained the gathered audience with a stunning show. This became a perfect ending to our sound based event on the central scene of the Norwegian capital.