In August 2011 the art project Living in Bjørvika launched the first song for the future neighborhood of Bjørvika. It is a summery, melancholic pop tune that triggers the listener to sing a long, but at the same time also reflects upon the Bjørvika area and the transformations of Oslo that are going on today. The artists, Geir Tore Holm and Søssa Jørgensen, commissioning the song commented that Bjørvika is a place that has been a topic for written and oral discussions, but not until now ever sung about.

Frode Fivel was commissioned to write and compose this song, and the track is part of Holm and Jørgensen´s Living in Bjørvika, under the umbrella of the exhibition project Common Lands – Allmannaretten.

There should be made a song for the place, a song about plans, concepts and realities.
quote from Geir Tore Holm and Søssa Jørgensen 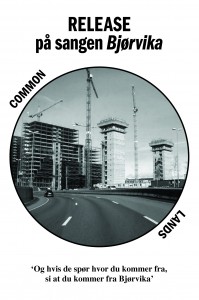 Common Lands – Allmannaretten consisted of workshops, two publications and commissioned new art works taking the ongoing process of redevelopment in the former harbour of Oslo, Bjørvika, as the starting point. More on Living in Bjørvika.

Åse Løvgren and Karolin Tampere was commissioned to curate a temporary art project in relation to the development of the former harbour area in Oslo called Bjørvika. Their project begun in November 2008 and aimed to investigate, intervene and comment upon this major transformation of downtown Oslo. The development of waterfronts is a current trend in post-industrial cities where previously industrial harbour areas are being transformed into new urban spaces that emphasise mercantile, residential and recreational purposes.

The exhibition project Common Lands used the process of re-development around the new neighbourhood Bjørvika in Oslo, to highlight a number of issues associated with urban development, distribution of power and access to public spaces and democratic processes. Step by step Common Lands – Allmannaretten was growing and taking different forms, to constantly be in process to able the ongoing investigation of this specific development and in parallel relate it to other urban developments around the world.

Living in Bjørvika was realized with support from The Norwegian Arts Council.